(Full Disclosure – I’ll be at SXSW as part of the Chevrolet SXSW Team.  Chevrolet is an official sponsor this year of SXSW.)

So, the road trip came to an end last night.  All of the teams made it to Austin safe and sound.  They generated tons of great content.  It was fun to watch.  I think the IOOH experiment was successful.  (A few people told me last night that they really enjoyed the interaction.)  I greatly underestimated the logistical component of those clues, though.  We had to ship and coordinate with ~16 different hotels, all different days to be delivered, and different times to check-in.  There were many variables that made this particular component challenging.  That’s to be expected, though, when using a guerilla-like approach.  We couldn’t do much – this isn’t a sophisticated use of OOH – but the point was to try to be as innovative as we could with this element of the experience.

To me, this is an interesting, very realistic way to give people more information/engagement with something as simple and as ubiquitous as post cards.  If I were in charge of a city/state branding initiative, where we were responsible for doing the “standards”, like post cards, I would immediately print the cards with some sort of tags/codes like QR codes/MS tags.  There would be so many opportunities for deeper, more dynamic engagement and content.  You could drive to videos of city/state leaders, citizens, even b-roll-type footage. Even fun facts about the city/state.  Even a website (which I know is not preferred, but could be tailored to the content on the card.) Or if you wanted to get a little more creative, you could drive people from a card of say, The Statue of Liberty, to The Empire State building, just the way we did with the scavenger-hunt post cards.  It could actually add a refreshing element to these otherwise novel (at best) objects.  I suppose in this scenario, these wouldn’t necessarily be true IOOH because the user would, in most cases, end up owning the card, but it’s still a vehicle to enable deeper engagement through an emerging technology.

And yes, I think QR codes are an emerging technology in the US.  I don’t know if they’ll catch on here, but SXSW is doing their part to introduce them to a large, influential audience.  I’ve said it before, but I think one of the top stories coming out of SXSW is going to be QR codes.  They’re on the badges, they’re posted around the convention center, and we’re contributing by using them in various ways.  We’ve placed them on all of the ride & drive Chevy vehicles so that people can learn more about each vehicle that they’re riding in or seeing out in the open spaces around the convention center.  And we’re placing them on a new car – the Cruze – as a way for people to interact with it because here, they can’t drive it or even get inside it.  All of the codes are placed on the car in locations that are specific to the content that they’ll receive.  So, if someone wants to learn about the Cruze’s engine, they’ll take a picture of the code on the hood of the car.

The content behind the codes, though, is really going to be key to make these things compelling and show their potential in how they can benefit the user.  We’re incorporating Chevy-in-pop-culture facts centered around film & music with the ride & drive vehicles, as well as special product content.  With the Cruze, we’re incorporating quizzes and exclusive video content that people can only experience in this way – through these QR codes at SXSW.  The payoff has to equal, or preferably, outweigh the buildup.  Otherwise, it just makes for a bad experience and bad experiences are, well….bad.

I’m confident in ours. Tomorrow, we’ll find out.

Example of our QR codes on the Cruze: 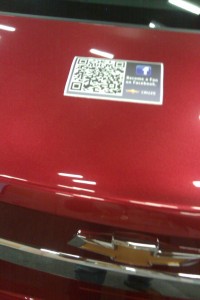 More to come tomorrow, after the booth opens and the Cruze is covered in codes.  Farewell for the night from Austin!