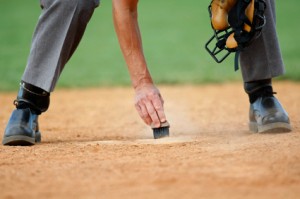 Yesterday on the last possible out, a perfect game was taken away from the Detroit Tigers’ Armando Gallaraga.  The ump, who before last night was considered by players as one of the best in the game, has come under intense scrutiny, as should be expected.  Throwing perfect games is such a rare feat to happen in baseball, and for another one not to be realized because of a clear (thanks to slow-motion TV) mistake is a travesty.  History did not happen last night because of a blown call.

The ump’s name is Jim Joyce and to his credit, he came out immediately after the game and owned the mistake.  He blew it.  He recognized the enormity of the moment, probably the biggest in his career and Gallaraga’s career, and he just blew the call.  He apologized and feels sick inside, but what else can he say?

He’s getting back to work today, in front of the Detroit fans again, despite everything that has transpired in the last 24 hours.  It would have been easy for him to disappear for a few days/weeks, let the brunt of it blow over, and resurface again anywhere outside of Detroit.  But, he’s plugging along.

Here’s my parallel – as our performance goes, we all have bad moments.  Sometimes, we even have bad days.  I often feel like, as a leader of whoosits and whatsits, I’m required to perform and be “good” all the time.  I expect that out of myself in everything I do.  In fact, I expect to be great more often than not, but the simple reality is that I’m going to have bad moments and bad days and it’s just the way it is.  And that’s OK.

I spoke about Hemingway’s “A Moveable Feast” yesterday and wanted to include one of my favorite excerpts.  It didn’t quite go with that post, but it seems appropriate for this one.  Here, he’s talking about his process in working through writer’s block:

“…sometimes when I was starting a new story and I could not get it going, I would sit in front of the fire and squeeze the peel of the little oranges into the edge of the flame and watch the sputter of blue that they made.  I would stand and look our over the roofs of Paris and think, “Do not worry.  You have always written before and you will write now.  All you have to do is write one true sentence.  Write the truest sentence that you know.”  So finally I would write one true sentence, and then go on from there…”

We’re human.  We have bad days.  Do not worry.  You have done what you do before and you will do what you do now.  Keep plugging along.  And know that whatever you’re doing, as long as it is true, all will be good.