It’s Friday and time for the 2nd Friday 4-1-1 series.  This installation is all about mobile, particularly the specific enabling technologies associated with mobile that have an opportunity to make brand interaction richer & deeper when coupled with OOH/DOOH/IOOH.  If you’re a new reader, I think there is a difference between what makes “digital” Out of Home and “interactive” Out of Home – “digital” is made possible through display technology, “interactive” is made possible through enabling technologies.  These technologies enable deeper interaction with a brand and its OOH/DOOH installation.  You can think of it like this:

1.  Facebook Places Propels SCVNGR to 100,000 Downloads in 48 Hours – reality check, first of all – the “general” consumer doesn’t use geo-location apps like FourSquare, much less a new app like SCVNGR.  The penetration numbers for “digital” users who use geo-location apps are low (~4% according to Forrester).  However, I believe there is loads of potential for geo-location apps like FourSquare, Gowalla, FB Places, and SCVNGR (and the others).  These apps really enable a feature that I believe is core to a brand’s success in the new “Out of Home” space – reaching consumers where they are (out of home) and driving deep(er) engagement with the brand.  There are few brands who have really figured out how best to do this, but there are many who are experimenting.  As far as SCVNGR goes, their platform is really based on the idea of a Scavenger Hunt – users go around to different places (called “Treks”), when there, they have to complete a challenge, get rewarded via points, and then ultimately get rewarded with badges.  For brands, this platform is significant because it’s a built-out mobile platform, specifically intended to provide challenge-based scavenger hunt game-play experiences.  Yes, you can pretty much do the same thing with FourSquare (you have to work through FourSquare) and Gowalla (users themselves can set up “trips”), but they weren’t built for this very thing (neither of them are based on “challenges”).  In my opinion, it’s a better way to reward consumers who are loyal enough to your brand to go through a challenge-based scavenger hunt (again, outside of their home) vs. just checking in repeatedly at a single place.

2.  Four Seasons Joins Geo-Social Gold Rush With California Campaign – I’ve put together a number of campaigns with Gowalla – it’s not the Austin-based connection that I am high on with them, it’s really the experience they provide vs. FourSquare.  (In fairness, if I could put together any geo-location-based campaign, regardless of budget/time constraints, I would probably look at using both of them, but Gowalla is easier/more accommodating to work with.  FourSquare has sheer numbers, Gowalla has a more engaging experience, particularly on the brand side, in my opinion.)  So, it was nice to read about a brand like Four Seasons hopping on the geo-location bandwagon.  Again, this is yet another example of a brand driving engagement with consumers while they’re out and about, going through their normal day-to-day activities.  Who would have ever thought that just by “checking in” some place through your mobile phone, you could get rewarded with a hotel-stay voucher.

3.  Toys “R” Us Unveils Multichannel Mobiel CRM Tactics – here’s my QR code example this week.  Only problem with this is that it’s launching in Hong Kong only.  At least right now.  Solid concept though – targeted at their loyalty card holders, those loyal consumers can unlock exclusive content through these “R” (what Toys R Us is calling them) codes and from the sounds of it, with each scan, can earn more “loyalty” points, which is of benefit to them with real-world merchandise.  QR codes are commonplace in that part of the world, so I suspect this is going to be widely used.  Hopefully, the campaign will make its way here and even more hopefully, US consumers will actually know what to do when they see this weird code in front of them.

4.  Augmented Reality Campaign for Lustucru Pasta in 500 Supermarkets – pasta + a martian + tomatoes + Augmented Reality = AWESOME.  Forget about checking into places, whoever thought they could play a game with a martian just by purchasing a box of pasta?  Augmented Reality has come so far in a few short months.  Now, instead of needing a black-bound box that serves as a marker and a webcam, all you need is an AR application on your mobile phone.  It’s really unbelievable.  For this, though, I guess the question is, “does this drive more sales?”  Don’t know.  After I play the game, would I want to play it again?  Does it build?  Is there anything deeper?  If so, it could be the reason that I’d want to continue buying this pasta when I need pasta.  If not, on the surface, it’s a good engagement, but what does it do to achieve longer-terms goals?  It makes me smile, though.  Check it out:

“Uh-huh” – Reggie Bush hit the Holy Grail by combining geo-location (FourSquare) with social media (Twitter/Facebook) and the real-world (with StickyBits).  This is the perfect combination of driving Reggie Bush-brand engagement through the use of various mediums/channels, including a strong OOH play.  Basically, Reggie used FourSquare like a scavenger-hunt service (should have used SCVNGR!) so that fans could find autographed footballs around the city of New Orleans in anticipation of last night’s opening NFL game.  They could then attach messages to StickyBits for Reggie.  Great cross-channel program. 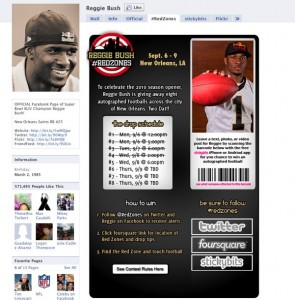 Before I get into this week’s “Duh,” I’ll say this – I think that “OOH” as a media channel has changed drastically in the past few years.  My definition of “OOH” is “anything that the user doesn’t have to own to have an experience with.”  In these cases, a user needs a mobile phone, but the point in which that experience originates is always OOH and from something that they don’t need to own – checking in at a location doesn’t require you to own the location, using a QR code doesn’t require you to own the QR code, and even playing a game from a box of pasta doesn’t require you to necessarily own the box of pasta.  Lines are certainly more grey than they used to be in terms of “OOH” and it’s in this grey area that I believe lives the 11th Screen.

Now, my “Duh” – it’s not an example this week, it’s a piece of advice based on a few experiences that I’ve had this week.  Slow down.  Life and work move very fast and most often, we make decisions in split seconds.  Those decisions can have a profound impact on other people and your own work (substitute “life” with “work” if you want to).  There is nothing wrong with slowing down, taking a deep breath, having a think on it, and then moving forward.

I hope you guys have a great weekend.  Would love to hear anything you’ve got to say about any of this.  Just shout!