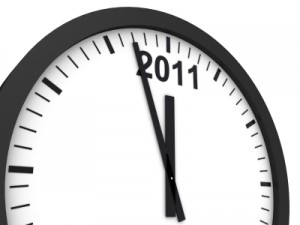 Happy Friday, everyone! Another week is over and we’re one more closer to the end of the year. I can’t believe it. It’s getting to be the time where the mad rush starts to “wrap things up” this year and everyone starts to look forward to the new year. I find this time of year to be both exciting and maddening because of this month-long dance between effort and anticipation. I’m choosing anticipation for this week’s Friday 4-1-1, coming at you with a first look at other’s looks into 2011.

1.  2011, A Tipping Point for DOOH? – very well rounded post from Ken Goldberg at Neocast.  From someone who does not operate within the DOOH industry (particularly the media side of things), it sure does already seem like we’ve reached that tipping point. Look around and note how many digital screens you see. On my morning commute alone, I see 1 at the courthouse, 1 at a church, 1 on the train, 1 in my office building lobby, 1 in the elevator, and 1 on our office floor. Everywhere I turn, there’s a screen with content. I feel like consumer’s expectations are to see physical digital screens around them more often than not. Now, the question to me is: is 2011 going to be the tipping point for “everything’s a screen” and “Interactive Out-of-Home (IOOH)”?

2.  A True Outsider’s Prediction of 2011 – this post comes from someone that has no affiliation to the OOH/DOOH industry. Dave Snyder at digital/tech agency, Firstborn, presented one of the first “looks” at 2011 in one of my favorite publications. The entire list is worth reading, but the couple that I focused on:

Privacy – “we will say goodbye to privacy. Actually that happened long ago, it’s just that people will stop caring.”….This is one of the big concerns about truly targeted place-based advertising – how creepy and invasive the thought of it is. My thought is aligned with Dave’s. People like to complain about it, but I’m not convinced that they really care. They want their lives to be made easier and more convenient, and if that involves giving up more and more of their privacy, so be it. I don’t know if people will ever “embrace” it completely, at least not for the foreseeable future, but I think they’ll “accept” it. They already have to a large extent.

Flash vs. HTML 5 – this is big, too, to the DOOH industry. Much of the moving content in digital screens is created in Flash. Now, HTML 5 opens up possibilities that don’t have some of the handcuffs that Flash has, particularly in terms of compatibility. Who cares? Consumers don’t care. They just want to see moving, dynamic content. We – on the storytelling side – can’t lose site of the most important thing – telling the story in the most compelling way. The story’s the thing, not the technology to create and deliver it.

Frivolous Technologies – ie QR codes – agree and disagree with him on this. More and more, QR codes are being introduced to the mass public by big brands. Will they stay? Or will they evolve into something else? Don’t know. But to me, the most important thing here – these types of technologies are not frivolous. They serve a critical need in today’s ecosystem by connecting the offline (real-world) with the online (virtual-world). I hope 2011 will be the year of the shakeout with these technologies (will there by 1 universal code or will codes begin to have similar, more comprehensive capabilities, will readers automatically be installed on all phones???), but I sure do hope they don’t disappear. Personally, I don’t see it happening.

3.  11 Consumer Trends for 2011 – this time brought to us by TrendWatching.com. Shout out to them for noting that trends don’t begin/end on a particular date. They evolve. Hope you get that message here, too.  #1 “Trend” – Random Acts of Kindness. This is great because at the core is the idea that people are good and appreciate appreciation. This requires connections – between people themselves and between brands with people. Particularly important to the OOH industry because it’s this connection – this real connection – that people crave, not dynamic, place-based ads. It’s the 2-way communication that they appreciate, not the 1-way push. It’s knowing, and seeing via action, that “someone’s on the other end,” not the dreaded black hole of awareness-driven, self-serving advertising. It’s the purposeful engagement that really matters.

Another trend mentioned – Pricing Pandemonium. This section of the report talks about “always-on technology” and “connecting consumers to deals closer to the point of sale,” but never mentions any other screen than the mobile screen. True digital signage can make this new type of experience even more dynamic, working in concert with the mobile phone. I really think that the reason physical screens are not being mentioned by almost anyone outside of the industry is that a) we don’t really need them and/or b) the screens up right now are not providing the type of value to make others notice. Yes, they’re everywhere, but are they effective?

Bringing every-surface-can-be-turned-on-and-made-into-a-screen right to your pocket. Doubt we’ll see something like this in 2011, but what will these devices be like a year from now, and more importantly, what kind of effect will they have on the places and things around us?

“Uh-huh” – I’m big on infographics and becoming big on the idea of data visualization. I presented a version of this infographic a few weeks ago – my vision of the components that make up any OOH initiative and insofar as the overlap goes, some of the finer things to think about when planning.

But this week, I found the infographics of all infographics and its focus is on data visualization. INTENSE – 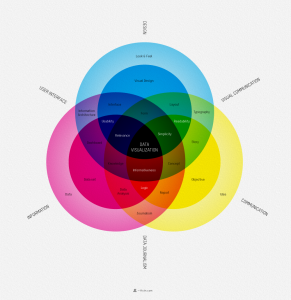 For a complete explanation, check this out. It’s smart and makes a lot of sense, once you get over the overwhelming feeling. So, I ask myself the question – what if I turned mine into something like this? What “components” would each one of the sections of overalap result in? I think it could get real interesting.

“Duh” – I talked to my team this past week about reflecting on the last year and specifically taking note of everything they’ve accomplished. As is the case for many of us, it’s been a long and trying year, but certainly not without reward. I find it easy to get bogged down in the disappointments and/or struggles that will inevitably be there each and every day, but it’s important to recognize the good things, the accomplishments, the blessings that we have experienced in our lives over the past year.

Well, as always, I’d love to hear any of your thoughts. Just drop me a comment or a tweet, whatever you’re comfortable with. Thanks, again, for reading. Have a great weekend!