Wow. What a week. Do I say that every Friday? It’s felt like 5 weeks back from the break, not 5 days. As you can see, I’m making some changes to the blog. I haven’t been able to get it exactly where I want it, but over the next few days, it will be there. I hope you like the change. It’s really designed to reflect the depth of this space I’m calling the 11th Screen – a bit more robust, visual, and exploratory – and hopefully, it will be just as simple to get around (or simpler!).

I haven’t explored as much as I would have liked to on the Coke campaign that I posted about earlier in the week. A few people commented and gave me some insight on other components of the campaign (Kyle/Brian – thanks!) and I have been able to uncover a few more myself. But as I said, this is going to be an ongoing journey, so I expect the scope to be more filled out throughout the year. Since it’s all fresh, I thought it would be best to dedicate today’s Friday 4-1-1 to more of this Coke story.

1. Thanks to the guys at IndoorDIRECT, they clued me into a video that ran on their Restaurant Entertainment Network, specifically in Wendy’s (~200 locations).

As you can see by the video, they ran a complimentary ad (to the right of the video) advertising a special offer – obtained by texting in a short code. When texted in, consumers received a coupon for a $1 Frosty (Coke) Float.

They also received a link directing them back to the same mobile site I experienced from the “Secret” shortcode on my bottle. Smart, although I wouldn’t expect anything else from Coke, to utilize the same mobile property and create different initiatives to drive traffic to it. This is another example of how purposeful they are about touching consumers when they’re out and about, whether in a grocery store or quick serve restaurant, and enabling them a way to engage with the brand story.

And along with this whole promotion, Coke also included a nice piece of branded content by sending out the Polar Bear to give out Frostys at an LA Wendy’s to tie in the Frosty coupon offer as well. Thanks to Brian at IndoorDIRECT for bringing this to my attention, and kudos to the great work they did around this!

2. One of the best Out-of-Home experiences that I saw last year was Coke’s Happiness Machine. If you’re not familiar with it, it was a vending machine that they placed in a school (don’t know how set up it all really was?) and it delivered “doses of happiness.” See for yourself.

This is great because they took an object – a “thing” – around us and turned it into an engagement vehicle. It wasn’t digital. But it was highly interactive. Through good ol’ human touch. Thanks to Kyle for sending my way!

3. Although I can’t find this feature out there, I read about Studiocom and Hypnoticmedia partnering together to create an immersive website.

After two years of running its “Secret Formula” campaign in traditional media, The Coca-Cola Company discovered that its target consumers (18-35) weren’t hearing the message…Coke realized this was the perfect opportunity to both engage its audience in the digital realm and re-position the story behind the “secret.”…Studiocom filmed, developed and launched a highly-interactive, self-guided, video-driven web experience to show young consumers how Coke’s “secret” ingredients could make everyday moments better and serve as an anticdote to modern day woes. Innovative augmented reality features brought interactivity and engagement to a whole new level, allowing users to unlock additional video content using only printouts and their webcams.

Quite interesting that this campaign was recently “refreshed” and targeted to millennials, which brings me to the last thing I found…. 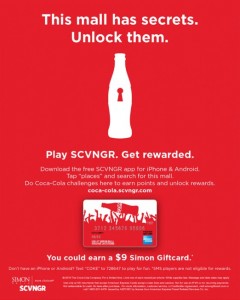 Teens (Audience) + Coke (Brand) + SCVNGR (mobile) + Malls (OOH) = the type of engagement that makes sense because it’s a) centered around the idea of interacting with teens while they’re out and about b) supporting the brand’s story in a unique way and c) the thing that could make a memorable experience for this highly impressionable and influential target audience. And memorable experiences with a brand create trust and trust creates loyalty.

“Uh-huh” – as I’ve said before, in the end, it’s all about building trust-based relationships between brands and their target audience(s). In order to do this, I believe it’s imperative for brand’s to understand their story and the channels available to them. Once they understand those two fundamentals, they can only hope to utilize them to their fullest capability. Few brands do this well. Coke is one of the ones who do.

“Duh” – I have not uncovered 1 2D barcode (ie – QR Code) in this short journey and I haven’t come across any while I’ve organically experience Coke myself, in my personal, everyday life. And that kinda makes me happy. As you can see by all of the technologies that they’re already using – mobile SMS, mobile location-based SCVNGR, augmented reality, that good ol’ human touch – they’re driving consumers into the brand story just fine. If anyone’s seen a code-based implementation for Coke, I’d love to see it. I wonder if they ban them from their arsenal?

In one long week, I’ve been able to uncover a deep brand story that is being told through many channels, including OOH. The channel is powerful, for sure. It’s about understanding what you need to say, though, before getting to exactly how, or through what channel, you’re going to say it.

As always, I’d appreciate any thoughts you can send my way. Have a great weekend!