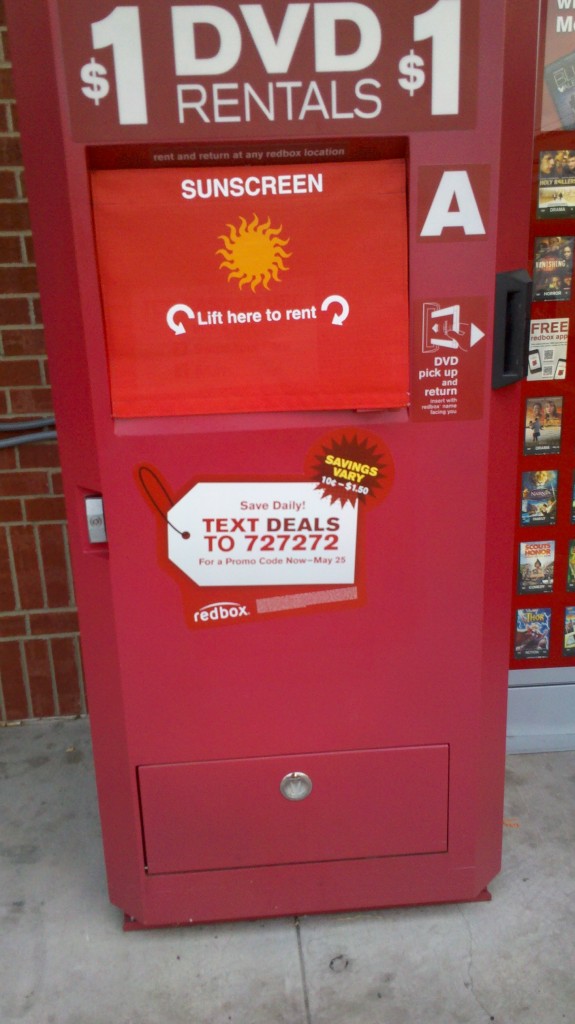 I’ve explored many examples of what I would consider to be the 11th Screen solutions here – those that are in some way interactive, by nature, and occur outside of the four walls of your home or office.  That’s a bit of an oversimplification, but the result of interactivity outside of your home is bridging the real world with the virtual world. And as you might have seen here, or observed on your own, there are many different ways that the bridge can be built.

I think one of the simplest examples of this bridge is Redbox (the red movie kiosks). I’m sure you’ve all seen many different Redboxes along your daily journey. I probably have 6 of them on my way to the train station to/from work. In many ways, Redbox is the quintessential 11th Screen example. It’s an Interactive Out-of-Home (IOOH) solution that is enabled by touch. You don’t have to own the device to participate in the experience. It’s a solution that has achieved (mass) scale and perhaps most of all, it’s a revenue generator. There might not be a better utilitarian kiosk solution out there.

Recently, I’ve noticed a few additions to the Redbox kiosks near me and I find them fascinating. Because they’re scratching the surface of becoming effective multi-channel devices. They’re only scratching the surface, though, and I wonder if Redbox is at crucial tipping point. With the introduction and accessibility of live streaming through services like Netflix, the act of renting movies is becoming more and more about the convenience than anything else – more than the true cost associated, more than the experience, and more than the physical disk. And while Redbox has served as a convenient and accessible utilitarian device, the game is constantly changing, in terms of technology and consumer expectation. So, these additions that Redbox has introduced and continues to explore are good, but they have some bad and just plain ugly characteristics that they need to address – and in short order – to have a chance in this rapidly evolving technological world of ours.

First, let me start with the GOOD – as I mentioned, I’ve noticed their effort to become more accessible cross-channel. It makes perfect sense because the one thing that everyone carries with them when they’re outside of their homes is their mobile phone. So, they’re likely to have it right there with them when they interact with the Redbox kiosks. Over the weekend, I saw a special promotion on the front of the Redbox kiosks that drove people to use a SMS shortcode for special offers. 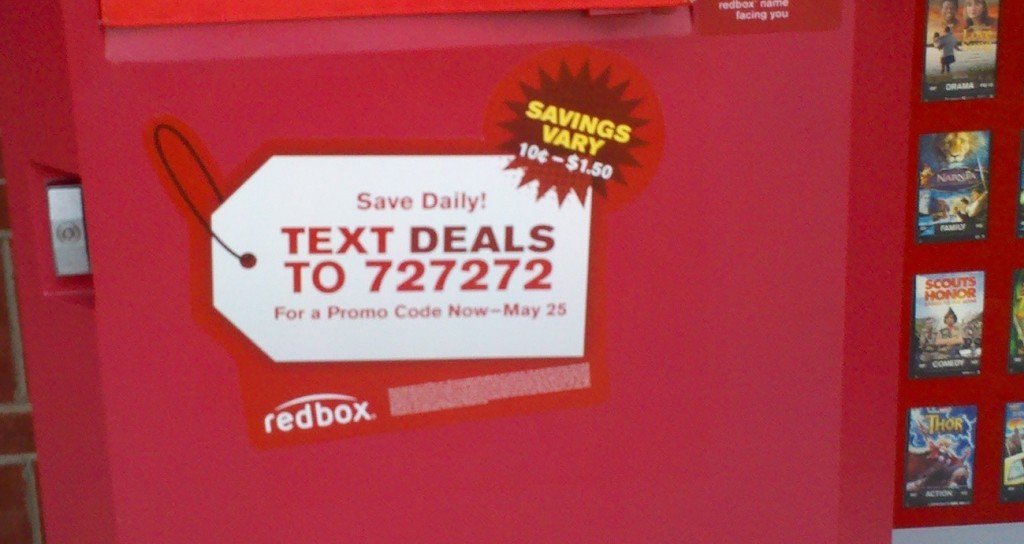 This is not a new tactic, but an effective one, especially for a physical kiosk like Redbox. The shortcode promotion instantly provides another channel to drive people back to the kiosk.

In addition to the shortcode, Redbox is using QR codes to make it easy on people to download the Redbox mobile app for iPhone and Android. 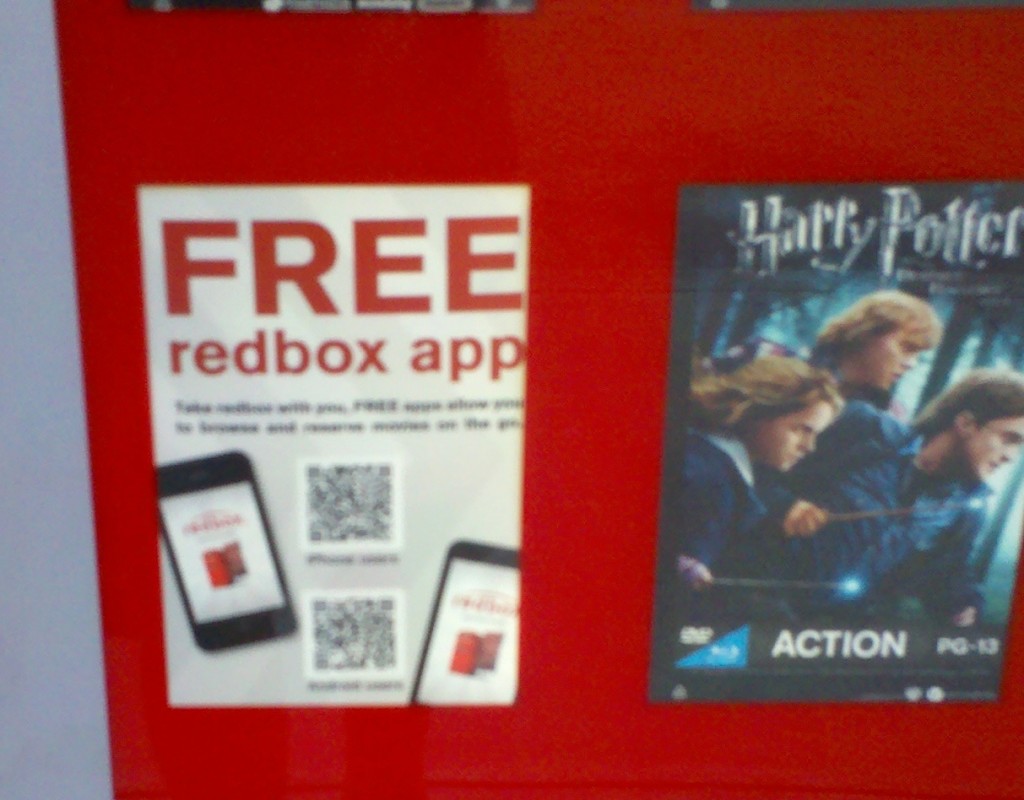 There could be a better way to drive people to the apps, but say what you will about QR codes, they provide instant, easy access directly to the app. And I think they’re more actionable than a standard text call-to-action.

Once you download it, the app is pretty handy. It shows you all of the Redboxes in your vicinity and allows you to search movies, which is an important feature since they’re not stocked with the newest releases right off the bat (which I think is one of the major downfalls).

All in all, these two extensions/gateways through mobile are both solid ways to keep people connected to the Redbox experience and drive them deeper in it.

But in my opinion, they are missing a major piece as it relates to connection, which is the glaringly BAD. Watching movies is a social activity. Where are any of the social hooks in the Redbox experience?

In many ways, the Redbox experience is a 1.0 web experience. There are no ways to connect with other people with similar interests, yet the sheer act of watching movies is a shared interest. What would this experience look like if the sign-up mechanism were initiated through Facebook Connect? Not only would sign-up be streamlined, people would have the ability to instantly let their friends/family know what they’re watching, what they like or dislike, and even tell or see others what they think about the movies. And I think that’s just the beginning of something like that.

IntoNow – the audio-recognition mobile app – does a good job of providing a deep experience on a seemingly surface-type of action. There, once you check-into the show that you’re watching, you have the ability to learn more about the show, the actors, the episodes, etc. They include a direct link to imdb.com, which is a deep experience into itself, especially for movie buffs. They’ve gone beyond the audio recognition and incorporated many smart social features, more than just sharing. What if Redbox had some sort of check-in and/or deeper “learn-more” experience like IntoNow?

Maybe Redbox has done just fine the way it’s been operating, in its 1.0 experience. But aren’t we at the point where playing the game has gotten more intense? Aren’t consumer expectations way beyond this type of experience?

I know I want more.

Then, there’s the UGLY. Redbox is an efficient machine. The fabrication and engineering of the box is really top notch. I think it’s a model for so many self-serve kiosks. But in all its glory, what is up with the sun flap? 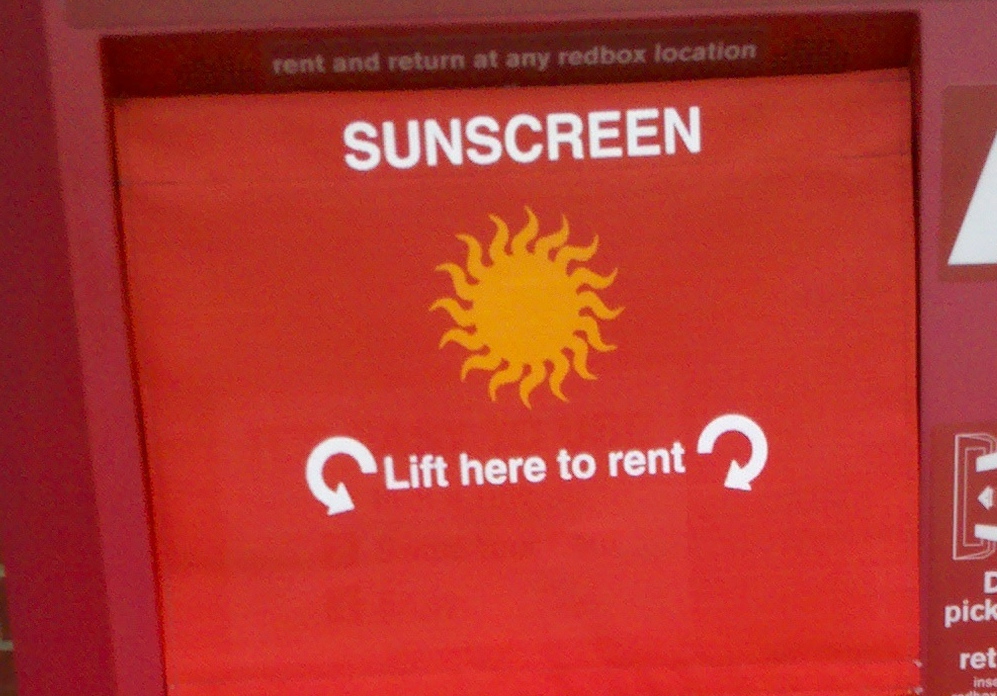 That is the most awkward piece of fabric that I’ve ever had to deal with – even more than the baby sun shades for your car. If they would just create a simple latch, the process of renting movies in the sunlight would be so much more enjoyable.

But here’s the question – in the game of convenience, why create an experience that might just be good enough? In the end, that’s what I walk away from Redbox with – it’s a good experience.

And the problem with good is that it’s not great.