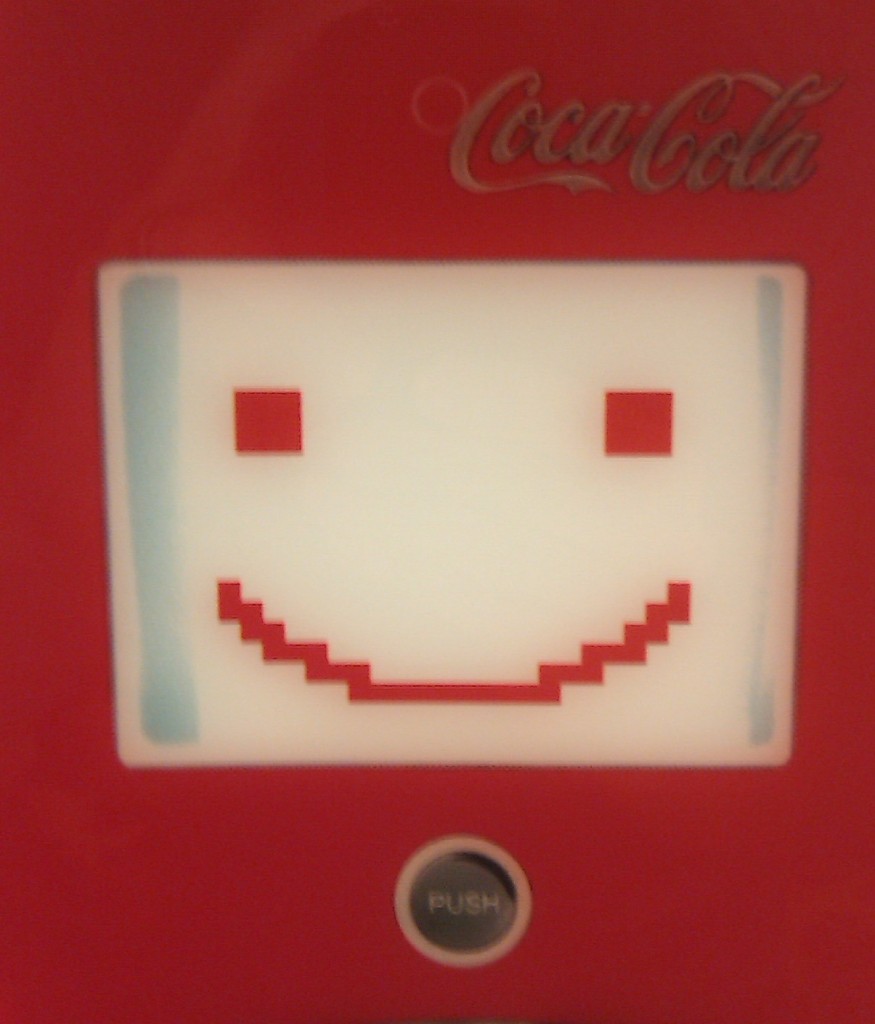 The more technology is introduced into our physical worlds, especially on account of brands, the more critical that supporting campaigns will become. It’s not enough just to introduce a new machine, system, or even engagement based on a new technology and expect that the mass will conform, use it, and god forbid, actually like it enough to use it over and over. It has a much better chance of succeeding – given the assumption that the machine, system or engagement is technologically sound – if brands use other channels, communications, and ultimately dollars to raise awareness and drive engagement.

I’ve written before about Coke’s new touchscreen soda fountains – the ones loaded with 106 flavors. They’re pretty cool machines – efficient, easy to use, and a little fun, but they sure do take up a lot of room, especially given the fact that they only service 1 person at a time. These machines are a fairly drastic departure from something (the “standard” soda fountain machine) that has been around for years and that the public is conditioned to use. These machines provide a new way to accomplish a pretty important task, one that is taken thousands of times per day.

Now, on one hand, I don’t know if the public cares enough about how they get their soda when they’re out and about, and even further, if they would ever care enough to form an opinion. If I didn’t geek out about things like this, I wouldn’t. But on the other hand, one thing that I’ve learned over the years is that, despite what I care about, there’s someone out there – and usually a group of people – who have their own likes and dislikes and care about things like soda fountains. So, there’s a faction of public opinion at play here that could ultimately surface in one way or another.

Now, the truth of this is that, unless public opinion was/will form into a complete backlash against these machines, they’re not going anywhere. They’re only going to be distributed to more movie theatres or restaurants as time goes by. So on some level, the public is going to have to deal with this new way of getting soda from a fountain, regardless of what they actually think of them.

Here’s where Coke is really good. They recognize the need to gain support of this new way of doing things. So, the first step is to raise awareness, but their approach is to not raise awareness of the machine itself; it is to raise awareness of the benefit that the machine provides. This one machine can give you any flavor out of the 106 in its system and/or any combination thereof. No more being limited to the top 6 in its lineup because that’s all the “standard” fountains had room for. Yes, you could make a cool suicide (mixing all the flavors into 1 cup) then, but now, you can make an AWESOME suicide. Seriously.

Enter the creative campaign that they’ve launched – in the social channels and on mobile – to support (and gain support for) these new machines. Their Coca-Cola Freestyle application on Facebook gives users the ability to (virtually) mix any drink they want from the myriad of flavors, give it a special name, and share it with the world. 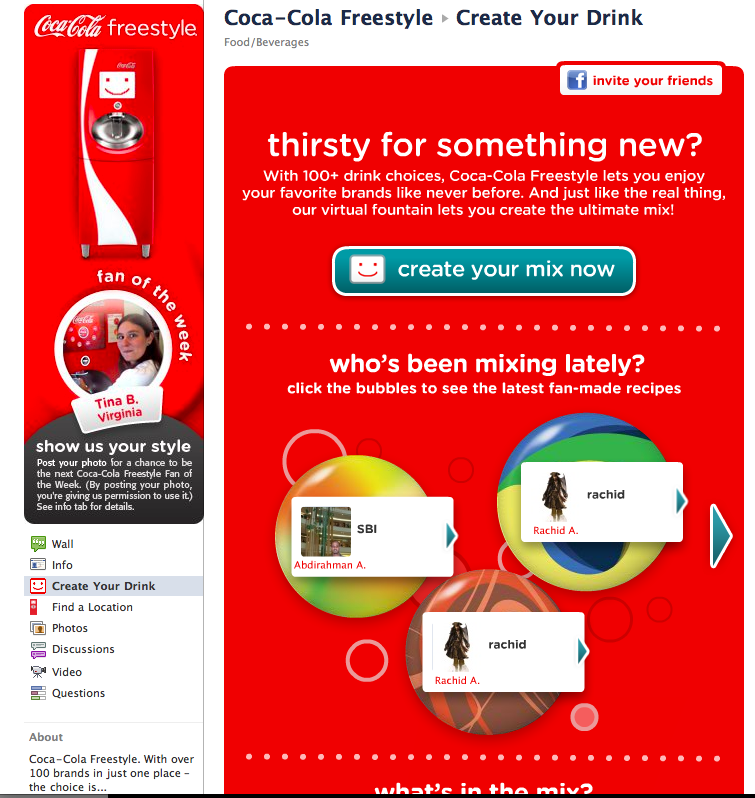 Trivial? Perhaps. But it’s fun. And it doesn’t take a lot of time, and it’s super simple to use, and it’s catchy enough to get other people interested. After I made my own drink, I posted it on my Facebook wall and a couple of my other friends got involved and made their own drink, too. Right now, the page/application is at 41,000 strong. Modest numbers, but I think this campaign is centered around deeper engagement, given that someone has to download an app and make a drink to really get involved. There is a barrier of entry, so to speak, that takes more active participation than say, a standard tabbed page in a brand’s Facebook presence. So, while raising awareness to as many people as possible (quantity) is key, creating a relatively deeper level of engagement (quality) could be more important to Coke. The campaign shouldn’t be judged by number of fans/likes alone.

In addition to their Facebook application, they’ve also created a mobile application – a game called PUSH! + Play. This game’s engagement is different than the Facebook application. This is a memory game where you’re introduced to the heap of flavors (still driving the benefit) and you have to “playback” the sequence that the computer gives you, in as fast of a time that you can.

The game is fun, too. I actually think it’s perfect for a train ride or a waiting room or even on your way up/down the elevator (because everyone has to be doing something at every waking moment, even when riding the elevator!) It’s casual enough to get started immediately and engaging enough to keep you playing over and over, to best your time and move up the leader board. (Leader boards are an effective “sticky” tactic. I think it’s one of the better improvements that Foursquare has introduced, but that’s for another post.)

It’s not all fun and (casual) games with the two of these applications. Yes, they do a good job of engaging you, but they also do a good job of informing you, too. They allow you to see where these machines are located near you.

For me, personally, these wouldn’t drive me into a new place, but they would drive me back into a place that I have frequented before, perhaps sooner than I had planned to. It elicits the response, “oh yeah, that will be cool for the next time I’m there.”

All of this to say that Coke is being purposeful about how they’re introducing this new way of doing things. I think this is what we can all learn from, especially in the “new” Out-of-Home space where technology is transforming our physical worlds into new things everyday – it’s important to compliment new machines, systems, and/or engagements (and content) with some sort of supporting campaign. Generally, the public will adapt to whatever is introduced, but the adaptation can be helped along through other efforts, like social and mobile engagements. Or print pieces. Or TV spots.

Too often, brands, marketers, and communicators of all sizes, struggle with cross-department and channel coordination. An easy way to bridge the gap is to ask, “What else are we going to be doing that helps this succeed? Is it a campaign? Is it a supplemental piece of content that someone might see outside of this particular activation? How is this going to be experienced elsewhere?”

More and more, the public consumes and shares media across various channels. This presents great opportunities to introduce and immerse them into the new “thing” that we want them to be aware of and participate in/with. And if we do it right, gain support, enough to accelerate change.

So, what do you think? Does Coke’s cross-channel support work in this case?