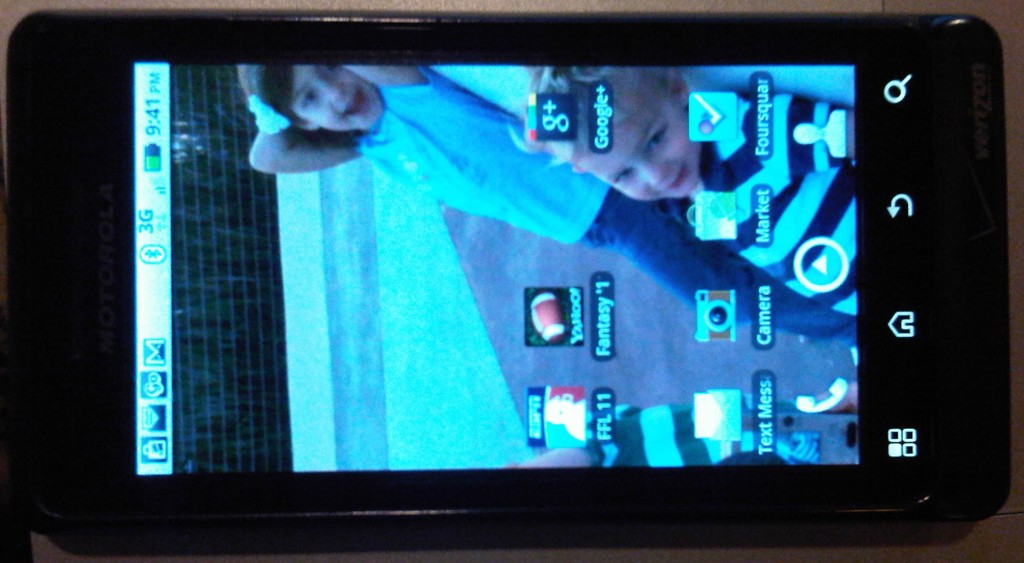 Let me tell you a little story about my phone…

First, know that I am a devout player of Fantasy Football. With the season fast approaching, the leagues that I am in have been completing their drafts over the past few days. This year, my neighborhood league was pulled together at the last minute and we were trying to get a draft going this past Sunday morning.

Well, this weekend, I was at my in-laws and we were scheduled to drive back to Dallas on Sunday morning. Staying longer at my in-laws in order for me to do the draft, in the confines of their home with the luxury of wireless, unfortunately, was not an option. Not because I have any ill feelings toward my in-laws and we HAD to leave, but because with 3 kids, it’s critical to travel during the window where they’re the least unruly. So, it just so happened that travel time and draft time collided.

Well, at first I just resigned myself to the fact that I wasn’t going to be able to participate in the live draft with my comrades so I custom-ranked my players in order to let the computer pick wisely for me. But that didn’t really sit well with me because one of the funnest parts to playing Fantasy Football is the draft. There’s strategy and trash talking and fun to be had during the draft. The computer gets none of that.

The next option was my iPad. I could use it in the car as long as I got my wife to drive. She was down and I was in. This was perfect, I thought, and actually a new experience. And one that I could give play-by-play to my wife because, of course, she would want to know everything about my draft. Well, there’s a thing with the iPad called Flash and when something, like a Fantasy Football draft widget operates on it, it might as well not exist. It was the first adverse Flash event I’ve experience on my iPad and I did curse it.

Now, really, what to do? I could try to call my picks in, but that just wouldn’t be viable for me or the person receiving my calls. Despite my good nature, I wouldn’t want any part of that, being on the receiving end. I reached the point that I just knew the computer would have to do the work for me and my season would be left up for chance. Hardly any control to defend my Neighborhood Champion title, which brings a good amount of street cred with the other dads. It was turning out to be a bummer.

But then….I looked down and saw my phone. My glorious phone. My phone that has an Internet connection and isn’t an “i” anything. Thank you, Google. I opened up the browser, went to the site, tested my system and viola, it worked. I was in business.

Now, I’ve recently written a number of times about the noise that we have to wade through to get to the quality content and experiences that are of benefit to us. I look at smart phones the same way – they are equipped with a lot of noise. I don’t download many apps on my phone because, honestly, it’s too overwhelming. The main function on my phone is text messaging. The second is the actual phone. The third is email. That’s about it. And I’m perfectly fine with that. (My kids, however, use more of the power of my phone than I do.)

But not today. Today, I rejoiced in the power of my phone.

So, the lesson here is – if you have a smart phone, it is powerful. Possibly even more powerful that you ever thought. It is a true enabler of so many things, be it a Fantasy Football draft, showing your mom pictures of kids through Facebook, or controlling a game on a billboard in the middle of Times Square.