On the train, there are 2 screens. There is this one:

And there is this one:

I never see anyone looking at, much less paying attention to, the red, scrolling, digital one. As I look across the train right now, out of 8 sitting comfortably in their seats, waiting for a) the car to fill up or b) us to leave, 6 of them are looking at and giving their attention to the phone one. They don’t even look up aimlessly to the sky to watch the sun peak through the clouds, like I’m half doing. Just head down, sucked to that little personal screen that some people still call a phone.

We are a captive audience here on the train and no one wants to look at the scrolling digital sign. Clearly, they place no value in it, whether it be from the low-fi technology that is too rudimentary for them or the content scrolling across the screen – happy birthday’s to this celebrity or that, facts about diabetes, or this day in history, all fascinating tidbits of content interesting only to who? – or the phone screen is simply too magnetizing to give attention to anything else.

One person plays solitaire. One person reads a book. One person scrolls through their music. I can’t see the others, but I’m certain that they’re all doing something different. This is one of powerful aspects to that little personal screen – anyone can essentially do anything they want to do on it. The experience is theirs. Not a preconceived and served up one. It’s the content they want as frequently as they want it. How can any other screen measure up?

In the lobby, there are 2 screens. There is this one: 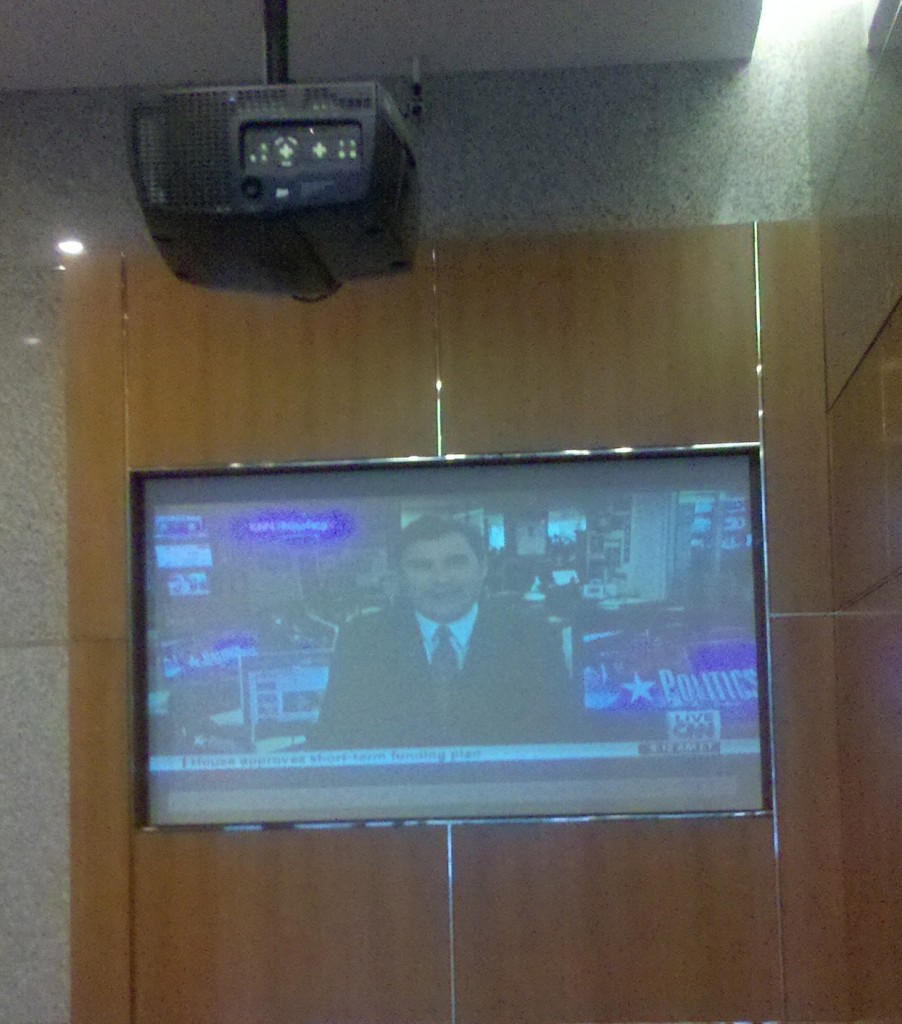 And there is this one:

Out of 4 people waiting for the elevator, 2 (plus me) look at the large news screen, 2 look at the mobile personal one. The ones looking at the large news screen are just filling time. It’s moving pictures and noise. We’re all half tuned in. I can just tell. And why not? I mean, it’s the same content that each one of us are a) coming from, having tuned into the news before work b) going to, being that the “news” feed on the monitors in our own company’s lobby is literally on news of some sort.

As I ride up the elevator, no one speaks beyond, “Good mornings,” and “You doing OK’s?” It’s eyes to the personal screen, that darn magnet.

People – including me – say all the time, “people are on the move, now more than ever, so it’s important to hit them where they are, which is less in their living rooms and at a desk and more when they’re out and about, in the real world.” This is one of the profound opportunities that anyone in the digital signage business has.

I wonder if those same people – again, including me – ever think about the responsibility that comes along with that opportunity. The responsibility to not create more noise and distraction. Kinda like solitaire or music.

We’re also in a time, now more than ever, where no one seems to experience boredom or lose themselves in thought. Quiet time, in the auditory and visual sense. Is there such a thing for people now?

These screens are impacting behavior and I have to wonder if it’s healthy. Is “all on all the time” or any variation really healthy for the human condition?

5 thoughts on “Morning Musings About Screens and the Human Condition”