Let’s pretend, for a moment, that there is value in QR codes. Everyone has their own definition of value, be it to get a coupon or to see product information or to become connected on Facebook. For today, we’ll just presume that the value proposition is met in order for someone to scan a QR code.

Beyond value, I think there are two key drivers or barriers (however you want to look at it) to scanning a QR code:

It must be convenient. This means that it really needs to be right in front of you and the proper size to scan within an arm’s length. I don’t think there’s a scientific formula that defines either; rather, I think you have to use good ol’ common sense. When printing a QR code, test it first. Put yourself in the position of the average person. If it’s not convenient for you, it’s not going to be convenient for anyone else.

The second driver/barrier is awkwardness. I have never seen anyone scan a QR code out in the public. Have you? I think, by and large, there is a sense of awkwardness that the average person doesn’t want to experience/let everyone see out in the open. I think people feel more comfortable exposing themselves to new technology in public places in as private of an environment as they can have.

If it’s convenient, it stands to reason that it won’t be too awkward. Problem is, most QR codes out in the open are not convenient, therefore extremely awkward.

So it was last night. When I was at the fast food drive-in, Sonic. There I was just sitting in my car, waiting, listening to the World Series, not much to do but look directly at this: 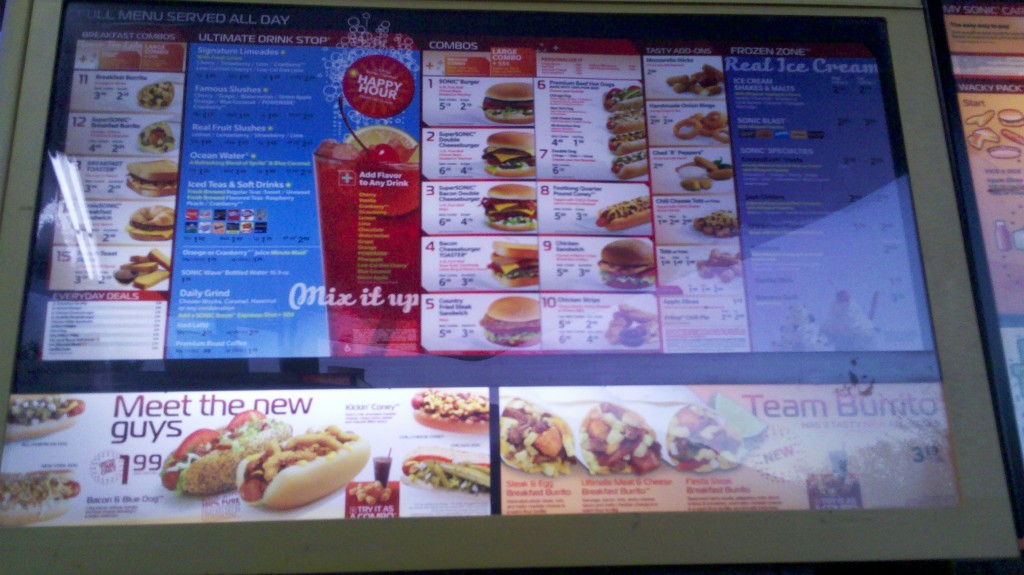 This is what everyone sees when they’re waiting for their order at Sonic. Directly in front of them. Windows typically down, no more than a foot away. For at least two minutes.

It is the perfect scenario for a QR code.

Lucky for me there was a QR code in the vicinity. Unlucky for me, it was not right in front of me.

It was on the back of the menu board, only visible if you’re looking across your car, and only convenient for a passenger, and extremely awkward for anyone to scan, even and most importantly, the passenger.

Let’s just pretend that there is value in this QR code and I really wanted to scan it. I walked away from this experience not taking that action.

Simple. Because it’s not convenient and, even more, it’s awkward.

If these are your two guides as you’re introducing any new technology out into the open, into public places, you’ll be just fine.