Maybe one of the problems with all spaces and things becoming interactive is the fact that the actual spaces and things are not set up to be interactive. That is, there are many accessibility issues that need to considered and worked through. As an example, this was an ad hanging above an escalator. 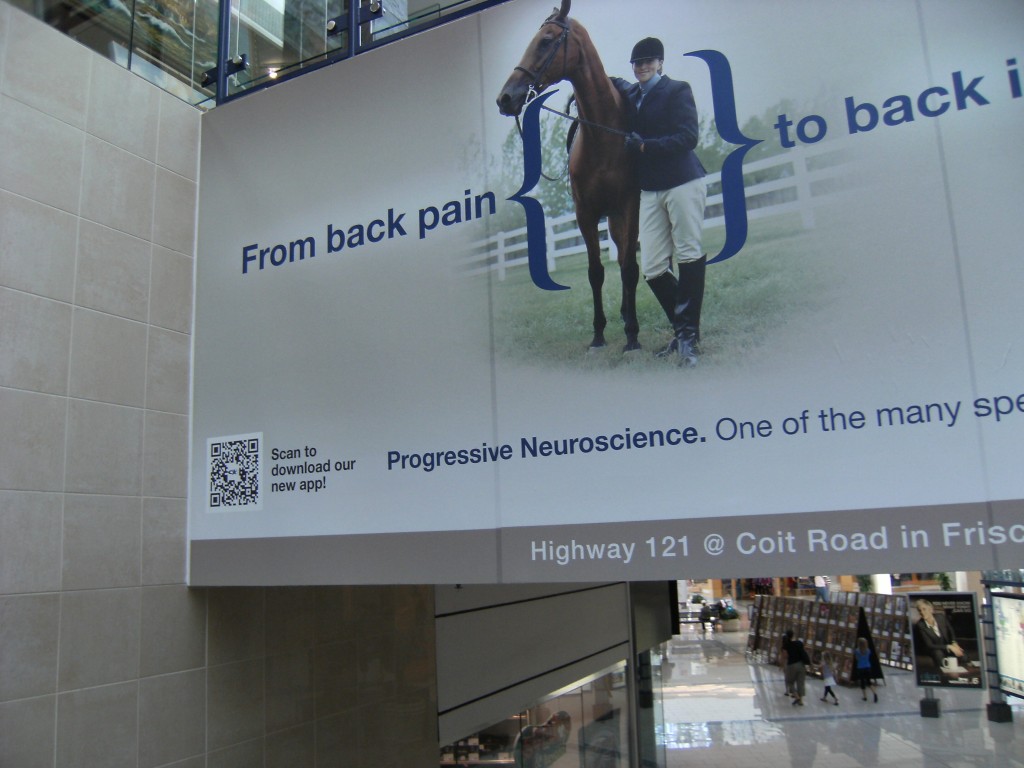 The only access to the ad and the code was riding the escalator. And even though escalators escalate at a nice, slow pace, they’re moving way too fast to take an action like scanning a QR code. It was a mad scramble to do what I could to take a picture of this, much less launch an app and then scan the code.

I understand that many times, decisions for any OOH campaign at scale can’t alleviate all accessibility issues. This ad might be hanging in an extremely appropriate and accessible place in another environment. When dealing with environments and buying ad space in those varied environments, I imagine there’s a percentage of “dead” ads because of all of the spaces that they’re going to be put in. For every bad placement (one that is not accessible), perhaps there are ten good placements (with no accessibility issues.) As someone who is responsible for budgets, however, that sort of thing makes my head want to explode. I want all of them to be accessible. That’s what I’m paying for.

This is one of the challenges of all things having the ability to become interactive. This problem of accessibility is of no concern if this is a standard ad. Or a standard digital screen. Or a standard billboard. Anything that is just push messaging – it’s all about eyeballs and an ad hanging right above an escalator generates a lot of eyeballs.

But when you try to make that placement work for interactivity, it fails miserably.

So, I guess what I would say is this – if you’re going to spend money to create an interactive “thing,” be it a print ad or a digital screen or a kiosk, do a little bit of digging into the entire media buy. Do what you can to really understand all of the placements. Making something interactive nowadays can’t just be, “let’s plop a code on this or a touchscreen on this and make it interactive.” The spaces that you’re buying could be great for eyeballs, but for anything beyond that, for any action, they’re no good.

It becomes a waste of money and expectations. No way people are going to scan the QR code in this particular ad. If that is a key metric, this advertiser will have a hard time believing in this particular form of interactive, enabling technology, despite its potential. They’ll just go back to the boring ol’ awareness-only, push-messaging, let’s-get-as-many-eyeballs-on-this-as-possible mentality.

And that is not the future.