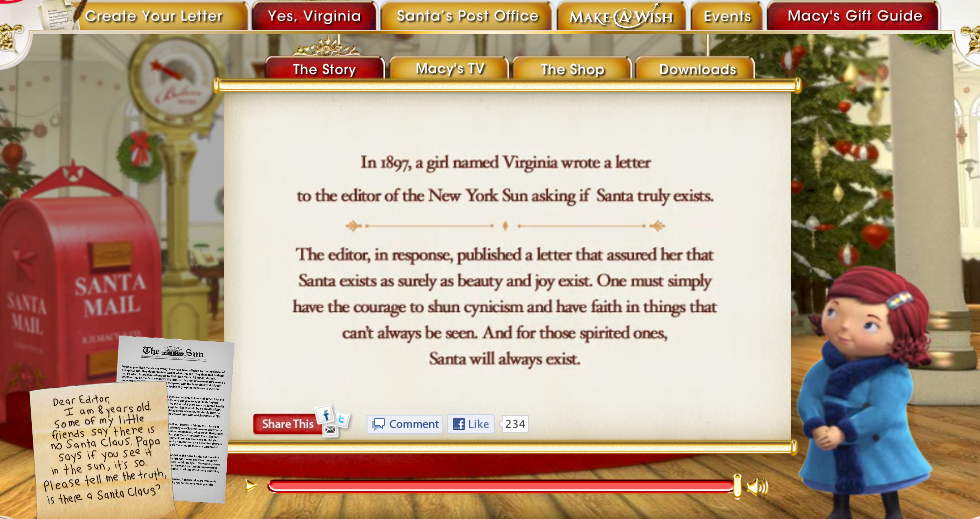 For anyone creating or thinking about creating an experience with any sort of enabling technology, look no further than Macy’s. With their new Believe-o-Magic Augmented Reality experience, they show us that when you use new technologies like this:

1. Don’t let the entire experience hinge on this technology

2. Do what you can to extend something that already exists

3. Anything that creates an emotional tie between people and/or people and a brand has a pretty good chance of use and success.

Macy’s hits at the heart of a deep cornerstone of Christmas – every little boy and girl’s belief in Santa Claus and the magic wrapped up in the whole wonder. And this year, they’re doing it through emerging technology. Beautiful.

I have written about Macy’s a few times before, primarily because of their Behind the Scenes QR Code campaign. I really liked what they did with that campaign in terms of using all their channels to raise awareness and promote the actual program. Their broadcast spots supported it, their social media efforts supported it, even their in-store supported it. It was a seemingly well-thought out campaign as opposed to so many that we see that seem like afterthoughts.

So, it made me smile when I saw their foray into another enabling technology – this time, Augmented Reality.

Fundamentally, I really like what they’re doing with this letters-to-Santa program. They’ve had a mailbox to Santa for the past few years, at least. It is a ritual for our family to go to Macy’s and let the kids write their letters to Santa. Our kids love it. (And oh by the way, they do make a donation to Make-a-Wish for every letter received up to $1 million. Say what you will about that, I think it’s a nice tie-in.)

But it’s here, in this fancy technology that makes ME want to go and be a part of the experience myself. This year, they’ve created a Believe-o-Magic (great name, btw) mobile application that allows you to pose with characters from a Christmas narrative that they created, take a picture, make a virtual Christmas card, and send out to whoever you want, including those in your social network.

Now, I’ll be very interested to see if Macy’s audience (parents, more middle-class than not, who knows what their familiarity with emerging technologies like this is??) is the right audience for Augmented Reality, but what I love about it is this – they are now deepening the experience. Without ruining it. The experience is already special, just in the fact that kids can write letters to Santa and put them in a big, red mailbox. Add an enabling technology on top of it and you have an a) richer experience and b) one that creates a more interesting piece of social content.

This experience does not require this app or technology to exist. That’s a great thing. Take note, and as much as you can help, when you create an experience that uses any sort of emerging technology, don’t let the experience live and die with that technology. It should just be an extension, one that deepens and extends the experience.

Last week, I sat in on a session with Michael Tobin (VP, eCommerce Integration) of Macy’s and I walked away knowing that they are very in tune with connecting with consumers, on their terms, through whatever technology is best for them. They’re not afraid to experiment with these new technologies, but they’re measured and thoughtful about how they use them, too. In my opinion (based on their QR code campaign and now this), they’re very good at thinking strategically about implementing them.

It doesn’t seem like Macy’s does something just to do it. I think that’s a hard temptation to fight in today’s world, with all of this new technology around. It just screams for people to play with it and often times, spend big money doing it. But with a measured approach, you might just create believers in all sense of the word.