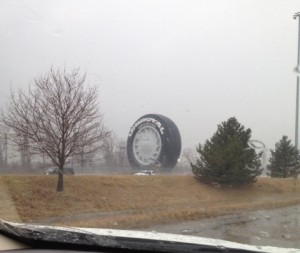 I’ve passed this tire many times over the past few months. Every time I pass it, I wonder what it signifies. So, finally on Friday, as I was passing by it again, I had a conversation with a friend who is also a local. It uncovered something interesting as it relates to the ‘experience’ of anything-out-of-home. Can the experience – in this case, the unique execution – actually be counterproductive to a brand? Here’s the conversation that leads me to question:

Mike: “Right. But what does it signify?”

Mike: “Is Uniroyal’s factory there or something?”

Friend: “One of those crazy billboards.”

This is the first time, after months of passing it, I ever thought of the notion that it was an advertisement (more than a landmark). I carried on.

Mike: “I guess the problem with that is – I don’t ever remember Uniroyal.”

It’s just the big tire. I wonder what Uniroyal would say about that. If it is, in fact, a billboard, it’s the thing that is the most memorable. Not the brand who is bringing the thing to you.