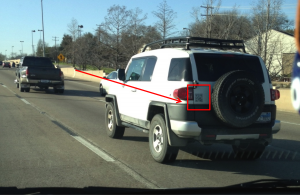 A QR code on a car. Right on the back there. No context whatsoever. But if you know what it is, you don’t really need context. You know that you could probably scan that thing, just like all of the ones you can scan on posters or in magazines.

On the back of a car?

My first inclination was to put this into the category of “what in the world are you doing?” But after giving it some thought, maybe there’s something to it.

Before I get into that, I have said many things about QR codes and setting them up for success. They must be:

All too often, none of these are addressed. Just because it’s simple to slap a QR code on anything, brands and marketers do it with the expectation that people are just going to do something with them.

Especially on the back of a car. What is accessible, convenient and valuable out of that whole scenario?

Not so fast, though. Maybe. This is where it got me thinking, for this “valuable” proposition. Now, I have no idea what is behind the code here, if anything. I would presume that it unlocks some sort of information about the vehicle. I don’t know how anyone would find that valuable, but given the way people throw these on anything, value has little to do with any sort of rhyme or reason.

What would be really interesting, however, is if the code unlocked something about the person behind the vehicle. Another dimension to your real self, as told through the lense of technology. I’m not necessarily talking about attaching a name, address, social – any personal information – to it. I’m talking about adding characteristics or traits that embody you. Think about it – someone wants to know more about the person who really is behind this vehicle and they can find things about their personality or passions just by scanning a code attached to the car. And for you, the car owner, it’s another form of self-expression.

Now, how this would really play out on a car, I don’t know. The car would have to be parked or not moving in order to scan it and even more, do something with the information it provides. To what extent that could actually connect people is not certain. But what is certain is this – technology is showing us every single day that real-world objects (like cars) can instantly be made interactive. This technology can bring these things to life.

This example here might not connect people to each other in this way. But if a car brand used a technique like this to show other consumers what characteristics (ie, laid back, analytical, fun-loving, etc.) and/or passions (ie, loves the outdoors, kids extracurricular activities, going to the gym, etc) belonged to people who drove a particular car, that could be a very intriguing insight. Particularly to a car shopper. It could be something that influences that kind of purchasing decision. Which, by the way, should be the whole point of any technology, much less QR codes.

Who knows. How much good would something like this ultimately be? Really? The more I think about this, the more I think it’s a crazy idea that provides little/no value.

But then again, so does an unmarked QR code on the back of a car.

3 thoughts on “QR Codes on a car? Maybe not such a bad idea…”