Good post today by my buddy, David Weinfeld, about 2-D barcodes, specifically how much they’ve been used this year, even citing a ScanLife report that shows a 700% increase in barcode scanning.  It’s a big number, but you must consider that it almost started at 0 in January.  The number of people who actually use this technology is still small.  What I found more interesting in the report was a) 1/2 of the barcode users were 35-45 skewing more male (I found this a high demo – would have thought it would be younger) and b) the most popular smartphone platform among users was the Google Android platform, followed by BlackBerry, then by iPhone.  It’s one of the few times I’ve seen anything led by something non-iPhone, particularly with the use of new technology.

This morning, I came across a Microsoft ad that featured one of their Microsoft Tags. 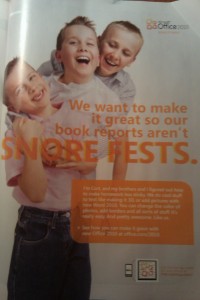 I had high expectations for this experience, it being a Microsoft Tag on a Microsoft ad about Microsoft Office.  (I didn’t quite get the 3-D thing on the text – don’t know if you can see it, but I looked past it).  What I got was a nice, easy site with videos.  My first impression was that it was good, but really, it just left me feeling like it was any other code/scanning experience that I’ve seen.

Then, I looked closer and went through the experience again. I have to say, it’s well thought-out and includes some little things that really separate it from others that I’ve seen. First, the videos are highly produced and there are lots of them! And they’re all sharable via Facebook and/or Twitter. The social integration is smooth and it pre-polpulates an #Office2010 hashtag. Besides that, it gives you a blank field to draft your own tweet. (Having done this before, I’ve elected to pre-draft the entire tweet for the user, including the hashtag, just for the ease of experience. In the end, people are used to drafting tweets on their phone so I suppose it doesn’t make much of a difference). The most important aspect here is that this feature extends the brand experience beyond this particular “channel.”

They extend channels via another feature, too – an email sign up to “receive details on how to get a free trial of Office 2010.”  This not only drives the user deeper into the brand, it drives them one step closer to purchase, which is the end goal, right?  Smart.

And on top of it all, navigating this mobile site is like navigating any good website on your computer.

This is what I expect from one of these experiences, particularly from a maker of this type of technology.  I’m glad I looked again, because it gave me a chance to notice things I should notice.  It doesn’t always have to be unique right off the bat, upon first glance.  Often times, regardless of what technology or channel it’s in, the elegance is in the details.  As is the case here.

700% shows awareness of this technology.  That’s a great indicator of widespread adoption.  What’s on the other end of the scan, as David and anyone else who’s dealt with/analyzed these technologies says, is going to be the key to real adoption.