And is this it?

In an effort to dig in and really experience the brand, I’m going to take a few of my favorite brands and pay as much attention to them as I can. I want to understand how they’re engaging with consumers Out-of-Home and even beyond that, how they’re engaging consumers in the “offline” (non-digital) world. Not to get caught up in semantics here, but it’s important to differentiate the two. Here’s a quick grounder in my definitions:

Out-of-Home – any experience that occurs outside of the home that originates from a platform or device that the consumer doesn’t have to own.

11th Screen – the experience that occurs between the offline and online worlds, regardless of the device or ownership.

What I’m looking for are examples of brands who are a) present in the offline and online worlds and b) how well they tell their story in and between the two. From the story comes real brand engagement, at least sustainable brand engagement. I believe that the Out-of-Home and offline spaces have great potential in the brand ecosystem, but they have a different definition in today’s world than they did in the past. Because of this, few brands really utilize them to their fullest potential.

So today, we’re going to start the first brand journey with one of my favorite brands – Coke. As a marketer, I stay abreast of what brands are doing (particularly in the digital world), but as a consumer, I’m not fanatical about any brands, so I ‘m not dialed into their every move on every channel. These exercises are truly going to be journeys for all of us. As we go through any of them this year and you know more about the brand/what they’re doing than I’m discovering, I’d love to know any/all of that information. It will only help complete the picture so we can more fully understand the depth and breadth of the brand and their story, and particularly what they’re doing across all of the channels.

So, for Coke, what’s the first thing that comes to your mind when you think about them and their brand story?

For me, it’s their “Secret” Formula and Happiness. Polar bears and that snappy jingle from way back when are up on the list, but they both play into the Happiness theme. I never really gave much thought to either of them until this weekend when I had an empty coke bottle in my hand.

And, I just happened to look on the inside of the wrapper and found a message along with a mobile short code. 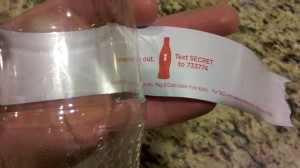 So I had to text it in. And then the journey began.

After my text, I received a link to a mobile website where I was introduced to Dr. Pemberton, big and bold, front and center. 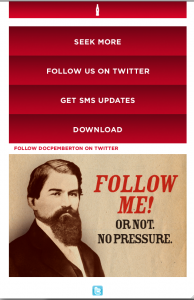 Not knowing who this character was, I had to follow him on Twitter and come to find out, he’s the inventor of Coca-Cola. So, I checked out his feed and saw good, constant engagement. But the more I read, the more I felt they were a little off in the nuances of their brand story, particular in the voice of Dr. Pemberton. I mean, he was born in 1830 and invented Coke in 1885 – two important components of the brand’s story – and the Twitter voice sounds like it’s a 2010 person writing for an 1800’s character. Not an 1800’s character writing for himself. The language and colloquialisms aren’t consistent with what I would expect to hear out of an 1800’s guy. Details like this are critical when writing any sort of narrative and it’s something that would make the Coke story sing a little bit more in my opinion.

Nevertheless, I journeyed on. From my mobile phone, I also subscribed for SMS updates so I could constantly be connected to the brand and this particular campaign. Shortly after subscribing, I was sent another text indicating that I would receive more clues each week (this tells me they have a solid content strategy, sending me consistent, purposeful weekly updates) + a link to the Coca-Cola YouTube channel. I clicked on the link, found an “Unlock the Secret Formula” video, so I played it. The video was short, compelling, filled with imagery (there’s Dr. Pemberton again), good score, and a series of questions:

Then it was over and I didn’t know what to do next because I was faced with many more videos on the channel. I don’t like getting in this deep, searching through videos and feeds, on my mobile phone. So, I went online to explore more – in a format more enjoyable to me –  where I found the same video. But here on my computer, it was interactive. The bottles in the top right-hand corner are clickable (look for them and click if you feel so inclined).

I clicked on each of them and was directed to the following:

While I might not have found the answer on the ingredients, I have learned more about a central character in this story – Dr. Pemberton himself – and have been able to experience and share Happiness with others. All key components in Coke’s story.

The experience up to this point has been immersive. I’ve engaged in an interactive, compelling experience. Imagine going through any of this on an interactive kiosk. Or a digital screen. What about getting a little bit more of a hint to the campaign at point-of-purchase?

I haven’t found any OOH components to this campaign, but from the digging I’ve done, it seems like there are plans to integrate more offline/real-world components into the experience. Out-of-Home is an ideal channel for a brand to engage consumers in an Alternate Reality Game (ARG) like this. It reaches them when they’re out and about in an already exploring mindset. It would just be critical that the story evolves in more bit-sized chunks because I wouldn’t have the ability, time, and probably even patience to go through everything above in one experience while I’m on the go.

But pretty quickly, you can already see how many channels they’ve used. Originating from one simple text message on a bottle in a grocery store. Mobile, digital, and social. Plus offline, via the packaging. (And I see, via some comments on YouTube, that the “Secret Formula” video is a broadcast commercial and currently running.) They could do a little bit better with the offline story, but we’ll have to see what/if anything else rolls out in the future.

It’s also important to recognize all of the different forms of content they’ve used. Video (and many different qualities/types), animation, games, quizzes, grunting bears, and Tweets. Not to mention everything else they’ve got going on in their marketing mix, outside of this one campaign experience.

Even in one sitting, consuming just about as much information I can about a brand, I am impressed with the thinking and execution behind such an engaging multi-channel experience. It sucked me into the brand via their story. Not through gimmicks or technology, but through a consistent, cohesive brand story.

I think that Coke is one of the brands who does it right. I like their advertising and communications approach. They’re dialed into their story and they leverage the power of social media in a productive way for their brand (in fact, they just completed their largest ever social media campaign – Expedition206 – it was quite a campaign.) They obviously have the size and the resources to market and engage on a massive scale.

This particular campaign is a great example of a brand using their story to engage consumers, through various channels and mediums, with many different forms of content, and to pass it on to others. Which really might be the true key – “Happiness” is to be shared. Coke knows this and even if they’re not willing to really gives us the answer to their “secret formula,” they’re enabling us to spread what they center their story around.

No doubt there will be much more to come on this journey.

Have you seen any of these? Did you find the experience engaging? Any other examples from this campaign? Would love to hear your thoughts!