I don’t know if there’s a single venue in the world that is more digitally turned on than the new Cowboys Stadium, er Jerry’s World. I was there last night for a concert. On our way, my wife asked me, “what are you most excited about – the concert or seeing the stadium?” I smiled. “Both,” I said. Nirvana.

You’d have to be living under a rock to not know about the JerryTron – the world’s largest high-definition display. Or the countless other displays and flashing lights that make it a mini Times Square capsule. Plopped right down in the middle of north Texas. It lives up to its hype, for sure. Especially for someone who notices and appreciates all of this digitalness. 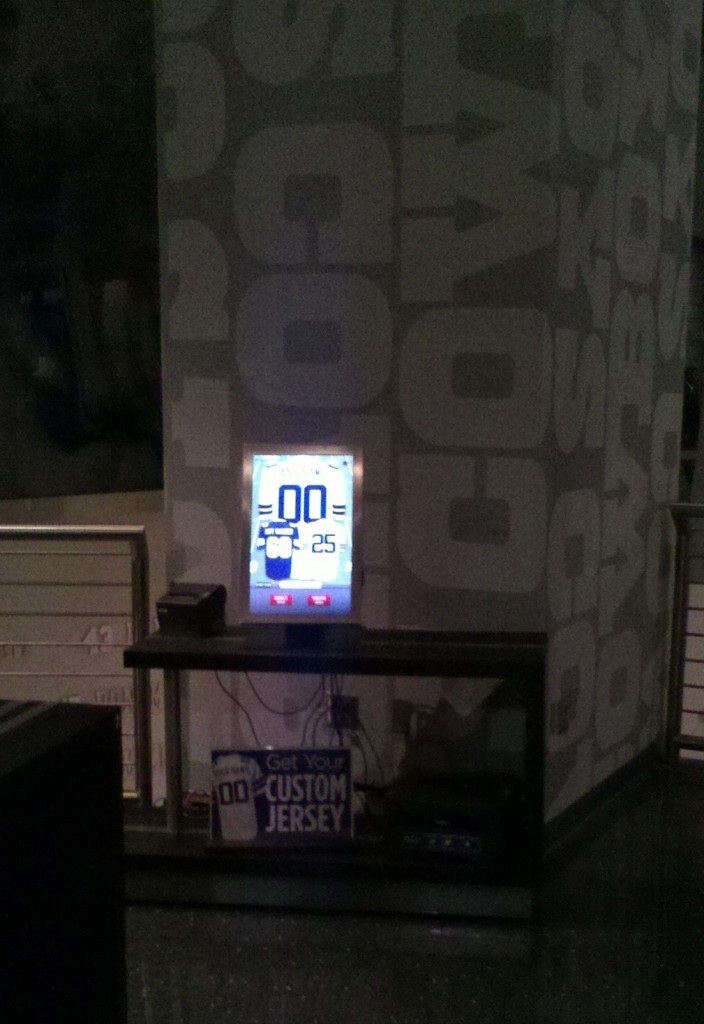 It lets you make a personalized jersey. Quite appropriate and engaging, especially in the middle of a football game when the entire Pro Shop is filled with consumers. I can only assume this takes a little bit of the load off of the sales representatives and the consumers. Even if there’s only 1?!@?

Every other place I looked, I couldn’t find anything else that I could actually interact with. How could this be? Really, Jerry?

Then, I saw the drunk people. One after another, walking through the concourse. Stumbling in some cases. And I understood what kind of disaster anything highly interactive would be.

I think this is a great example of the importance of context.

Interactivity would, no doubt, enable some better experiences. Any time you can give people control of their own experience through technology, be it waiting in line, purchasing something, or consuming content, it’s generally the ideal to strive for. But when alcohol is present and alcohol – not any sort of technology – tends to be the primary element that enhances the experience, then I don’t necessarily think it’s such a great idea. Abuse. Grime. Who knows what else.

On the consumer/fan side – anyone in that state of mind and environment could probably care less about controlling their experience through any sort of technology like a touch screen. In fact, it might have the opposite affect on their experience –  it might be more challenging and/or frustrating. They’re just there to have a good time. It’s that simple. So, why do anything that a) could hamper that experience and/or b) is not really needed?

While it’s a simple point of context, I think it’s one that shouldn’t ever be overlooked. Alcohol is the X-factor. In many areas. Even in digital/interactive signage.

So, OK, I see – Jerry did it right again. The the smart solution is to provide 1 eensy-weensy touch screen in a cordoned off area of Technopolis. Nothing more.

Note – Now, interactivity through mobile phones is a completely different story, regardless of alcohol. Everyone was doing something on their mobile phone at some point during the concert. And most everyone I saw had a smartphone. (I didn’t pay close attention, but I certainly didn’t see any flip phones and I saw a lot of iPhones). Opening the digital displays up to user-generated content through their phones might not be the answer. But I think there is opportunity to engage consumers/fans in some way that enables interaction instead of just display. That’s for another post.

Another note – I’m not passing any judgement and/or making any assumptions about anyone’s ability to function with alcohol. This is based on personal experience and observation. Just saying….