I work in a fairly small group in a fairly large company.  We have about 25 people in our group, specifically.  Come to find out, 4 of us are all alumni of the same college – Texas State University (at the time that 3 of us were going to school, it was called Southwest Texas State.  Although this dates us with the younger kids, it’s something that we’re proud of and never hesitate to distinguish).  As far as colleges go and as far as colleges go in Texas, it’s a smaller school, so it’s unusual (and random) that we find ourselves all working in the same group.  Recently, an opportunity came available to us at our alma mater, speaking at the annual Mass Comm Week.  So, this past Tuesday, the 4 of us loaded up in a car and took the 4-hour roadtrip down to San Marcos for the day and spoke on a panel together about Going Digital:  Changes in the Advertising & PR Industry.  After the discussion, one of the students in the crowd asked me about “gamification” and what our views on it were.  First, it was a fancy word (one that I liked nonetheless) and second, it was fun to answer her!  The concept of life becoming like a game is pretty deep if you truly think about it.  The implications are freaky, and whether we like it or not, not far from reality.  So, today, I bring you the Gamification 4-1-1:

1.  Nike Turns London Into a Game Board to Get People Running – Very simply, Nike makes a game out of running.  They wanted to extend their message on the importance of being active, so instead of creating billboards or other “standard” media extensions, they decided to make the campaign into a game.  Online, everything begins and ends on the GRID website.

I loved this quote from Tom Coates from Yahoo – “GRID is part of a growing category of ideas that sits within, as Tom Coates of Yahoo! describes, the ‘real world web,'” Douglas writes, “connected things that blur the physical and virtual spaces–things that thrive primarily because they excite us as humans, rather than being a vehicle for demonstrating technical capability.” This ability to connect the physical (offline) and virtual (online) worlds is really the “true” potential of OOH.  This “new” OOH is not about making people aware of the message by putting it up as big as you can on a billboard or on the side of a bus or throwing some display technology at it.  It’s about getting that message across through engagement.  This is a perfect example.

2.  Puma Makes Everything a Game – Shoe-makers and their gamification.  What is it? 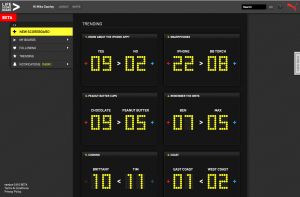 I found the usability frustrating, but the concept is great.  And it just goes to show that there is definitely something to this gamification thing.  Everyone wants to make everything a game nowadays, and technology has enabled it to the point to where it actually can be.  Look no further than Foursquare, Gowalla, and/or MyTown.  Actually, look no further than Nike or Puma.

3.  Microsoft’s Newest Acquisition is About 3-D Gesture Controls – So, I wrote about Microsoft’s gaming/motion-sensing device, Kinect, a couple of months ago when it was officially announced.  Now, today, comes interesting news that they are acquiring Canesta, “the manufacturer of semiconductor chips capable of sensing movement and gestures in 3-D.”  Just watch the demo:

So, yeah, the Minority Report/Iron Man whiz-bang isn’t too far off now, is it?  These are great strides.  Obviously, technology is mind-blowing.  I don’t know how long it’s going to be until technology like this is part of our normal lives, but it’s coming.  And if the industry is still talking about integrating “Digital” OOH into the marketing mix in a year, I’m afraid “Interactive” OOH into the experience mix is going to be quite a surprise.  By nature, this is (non)tangible extension to the fancy gamification.

4.  10 Reasons Why Smartphones Won’t Kill DOOH – Ever – Another thought-provoking piece from LocaModa, this time a good analysis between mobile and DOOH.  While all of Stephen’s points are relevant to the larger discussion, they are not to the gamification discussion.  Point #8, though – “Multichannel” – is quite relevant:  The smartphone screen isn’t the only screen competing for a user’s attention. With mobile, computers, TVs, cinemas and DOOH, advertisers are taking a multiple channel approach to their messaging. This means that ultimately ALL screens will be connected. Rather than a one size fits all approach, the media landscape is actually becoming more fragemented and micro-targeted as a result. This means that the phone screen is often part of a 360 degree solution – it’s not the entire solution – and neither is DOOH. All screens will be connected.  The places and things around us will become “screens.”  Everyone is connected, too.  See a theme here?  Sounds like the constructs of a game to me.

“Uh-huh” – Last week, I posted a story about how Mini created a “reality gaming” experience around one of their cars in Stockholm.  Yet another example of bringing us and the world around us together in an experience to engage in unique ways with brands and each other.  It’s quite appropriate in this week’s discussion, too.

“Duh” – Although not gamification-related, this is related to our panel discussion this week at Mass Comm week.  I said something that came out wrong and it’s bugged me ever since.  Just for some brief context – one of the unique aspects to the 4 of us alum working in the same group now is that we all come from different backgrounds.  I have an acting degree, another one has a directing degree, another one has a traditional PR/Comm degree, and the other one, well, I’m not sure what degree he has, but it’s different than all the rest of us.  Anyway, when we introduced ourselves, we gave a brief synopsis of our background and our journeys leading us up to working together right now.  I said something like this, “I got an acting degree, and there’s not anything from that degree (“what I learned in school”) that I use to make money other than maybe being able to speak in front of people.”  Ugh.  I knew, as I was saying it, it was all coming out wrong.  But I couldn’t stop.  First, these students don’t need to hear, “what you’re going to school for now, it’s really irrelevant, so why worry??”  No, that’s not the message I wanted to get across.  I’m a firm believer in life experience.  And no matter what you do, what jobs you’ve done, what you graduated with, all of the skills and experiences used during those times can help you in your present situation.  You’ve got to be aware of those things and constantly looking to call on those things, but it can all be used.  And it should.  What I meant to say is, “it’s less about the degree that you get because in reality, the real-world is much different than the college-world.  That said, these classes and this training prepares you for going out and doing your thing.  You’ll have to adjust many times throughout your career, and if you’re successful at adjusting, you’ll more than likely be successful in your career.”  At least that’s what I’ve found to be true.  Anyway, we were there for the students, and I really don’t feel like that one moment from me did them the best service.  So, if any of you guys are reading this now, take note. :)

Well, what a week.  I’m sure that this weekend, it being Halloween and all, with 3 kids ready to go trick-or-treating, I’m going to experience my fair share of gamification, even if it’s not the 2.0 version.