In an effort to write more regularly, I’m going to implement something that every other blogger on the planet does – a regular series.  It’s called the Friday 4-1-1.  And here’s how it breaks down:

1. Interactive Technology to Enhance Museum Experience – an affiliate museum of the Smithsonian, The Northwest Museum of Arts & Culture in Washington state, is piloting a “Passport to Discovery” project that sounds a lot like the myLOC passport system (set up in the Library of Congress).  Solid idea – make the user’s experience smarter each time they visit, based on their actions/interactions from the last visit, but my question is – how much of a pain is it to keep track of a passport-like tchotchke?  I would either lose it, forget it, or be annoyed that I have to sift through my catch-all drawer every time I need it.  Tie this into the one thing that people keep track of and don’t leave home without – their mobile phone – and you have something.

2. Google Introduces Branded Map Icons – simple – brands can now “brand” their locations into Google maps.  For OOH/DOOH/IOOH, brands can benefit in a major way.  They not only benefit from the brand recognition when Google maps is integrated into a digital/interactive sign, they benefit from the native functionality that allows users to automatically click-through to details about the brand.  I’m big on driving deeper brand experiences through all mediums, particularly OOH/DOOH/IOOH, and this is an example of an API unlocking that feature.  This feature has been available before now, but for a brand, there is a big difference from their location being tagged by a grey dot and being tagged by their logo, especially on an interactive sign, when you want to make it as enticing as possible.  Of course, this feature is only available to paying brands (using this as a form of advertising).  :)

3. Eye Expands Mobile Marketing at Malls, Sans “Big Brother” Effect – this is cool, but I just wonder for the end-consumer, if they make any distinction with geo-location ads.  The average consumer probably thinks it’s still creepy, regardless of “how” it’s done.  EYE and Ace Marketing & Promotions are working a system based on phone proximity, nothing GPS-related.  Here’s where I think digital/interactive signage (I don’t even think you’d need a “digital” sign) serves an ideal purpose – the sign is the bridge between the smart-but-creepy ad and the not-knowing-and-wary consumer.  Imagine in a mall, you walk up to a sign that lets you know what to expect on your phone – in terms of store advertisements – just because you’re “in the area.”  Viola, without doing anything other than being in that place, you’re pleasantly delighted when you look at your phone and see that Gap is having a sale on jeans.  You don’t walk away creeped out.  We need as much of this “non-creepy” interaction/advertising as possible right now – it will only help in the acceptance of digital/interactive signs (that have the potential to be very smart).

4.  Seahawks Utilize iPad Kiosks for Fan Registration – first, I can’t wait for football to begin next Thursday.  Second, anytime interactive technology and football are mentioned in the same sentence, my ears perk up.  So, I was delighted to read about the Seattle Seahawks building kiosks with iPads to “register over 20,000 fans” at their training camp this summer.  Sounds like they were also able to allow the fans to experience some premier content, which I would fully expect on devices like that.  I think this is a great, relatively cost-effective solution to explore when wanting an interactive out-of-home solution.  Take a $800 sophisticated piece of hardware & software, build a nice unit around it and you have yourself a feature-rich, well-functioning IOOH solution.

“Uh-huh” – I give this the “uh-huh” head nod each time I see it.  Imagine what could be done with this interactive film – The Wilderness Downtown – in an out-of-home setting?  Not only would the current iteration be sticky enough for people to stop, interact, and gather around, it sure would be cool to integrate the point where people are interacting with it and the point where they ultimately go (their hometown house).  That idea goes against what I said earlier about the “creepiness” factor, but it would be cool.

“Duh” – I don’t know if this is the right word for this category.  Nor do I know if it’s a “what were they thinking” category.  I just know it’s opposite of the cool, “uh-huh” category.  But this week’s installment of the un-cool comes in the form of QR codes.  And not one specific implementation.  Just as an overall solution.  I saw this one and this one, not to mention this one in a magazine I was reading: 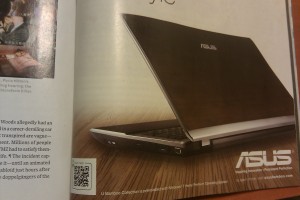 Now, look, there’s not another enabling technology that I’ve written about more than QR codes, but the more I learn, read, see, not to mention actually work with QR codes and other mobile technologies, the more I question whether or not the average consumer knows what the heck to do with them.  It’s all about the audience – the JFK/Twitter example will probably get more interaction because Twitter, in and of itself, does not attract the “average” consumer, but I just might be at the point of QR code over saturation.  Good to see so many examples this year, but are they working?  Jury is still way out.