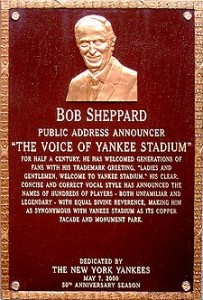 Yesterday, Bob Sheppard – the longtime, great NY Yankees announcer – passed away and left behind a huge void for Yankees, baseball, and sports fans alike.  As someone who’s gone to many Yankees games and heard his voice, the man was awesome.  And anyone who was involved with sports and baseball over the past half century would probably say that there’s no one better.  He was even called the “Voice of God” (by one of my personal favorites, Reggie Jackson).  His voice was that distinctive.  His presence was that profound.

I heard a soundbite from him this morning talking about his viewpoint on announcing.  He basically said that today’s announcers are loud and flamboyant, but his own view on announcing has never changed – he’s approached it in simple terms from the time he started:  he aimed to always be, “clear, concise, and correct.”

Even though this isn’t an announcement from one of his games, you can hear him in action – clear, concise, and correct.

Does your brand or the brand(s) you represent have a distinctive voice?  For that matter, do you?  Do people know who you are and what you represent when they “hear” you?  Is your voice clear, concise, and correct?

This can be a challenge for brands, even established brands who have been around a long time.  As I said at Kioskcom, the most successful brands at utilizing various channels, particularly the 11th screen (IOOH), are those who not only understand their audience, they understand their brand.  They know their voice.  They are distinctive in the marketplace, so they can use whatever channel needed to tell their story in the most effective way.

Social media adds a unique element into this mix.  The very nature of it allows for other voices to be heard in concert with the brand’s, and in the case of launch (or re-launch) brands who are in the process of defining their “official voice,” it can either help inform and define or hinder and prolong definition.  When undefined, it can surface a distinctive voice or it can muddy the waters.  And no matter how flamboyant or loud you are, I don’t believe you (or your brand) can sustain.

In the end, if you approach your brand like Bob Sheppard approached announcing – with the intention of always being clear, concise, and correct – you might have a great shot of being a distinctive voice in the marketplace and one with a profound presence.  And that, my friends, is timeless, and something that can be sustained.

One thought on “What a Baseball Great can Teach Brands”