And here we are, QR codes again.  There’s no other enabling technology that I’ve blogged about more here than QR codes.  For good reason – I think they have good potential, but I just don’t know if they make the general consumer’s life easier.  So, I don’t know that they’ll ever take off here in the U.S. (And I do have the perspective of actually implementing a program around them for a large brand.)

That said, I read what amounted to a good post this morning on QR codes, but it was another example that supports my doubt.  The post was titled, “NYC Garbage Trucks Take QR Codes Mainstream,” so it piqued my interest.  But when I saw what it was, I just had to shake my head: 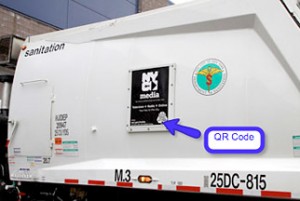 How many people take pictures of garbage trucks?  How many people want to get close enough to garbage trucks to take a picture of them?  I mean, who came up with this idea?  I just don’t get it.  What are they trying to accomplish?  Apparently, there’s a video behind the code that supports a recycling initiative in NYC, but it’s also going to run on TV.  Why don’t they just advertise the details of the TV spot?  Or just paste the URL big and bold on the side of the garbage truck that would accomplish the same thing?

I don’t think this is going to take QR codes mainstream by any stretch of the imagination.  I mean, if Calvin Klein can’t do it with a super-large QR code on the side of a building, I doubt that the city of NYC can do it on the side of garbage trucks. 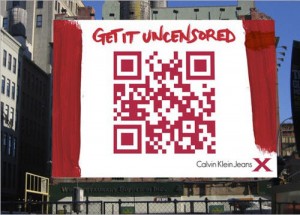 There is something to be said with delivering (exclusive) content through technology like this.  More and more, technologies are enabling brands to merge the offline with the online.  (This is the future of marketing, in my opinion.)  QR codes are no different.  But brands are still a ways away from utilizing these technologies correctly, and to their fullest ability.

What do you think of this garbage truck initiative?  Will they bring QR codes into the mainstream?

2 thoughts on “Will NYC Save QR Codes?”